First there was the pandemic, then came the “infodemic” — a term the head of the World Health Organization defines as the spread of false information about COVID-19.

The most dangerous conspiracy theories about the coronavirus are now part of the QAnon phenomenon. For months now, actors in QAnon have downplayed the severity of the crisis, amplified medical disinformation and have been originators of hoaxes.

The QAnon movement started in 2017 after someone using an anonymous account known only as Q posted wild conspiracy theories about U.S. President Donald Trump on the internet forum 4chan.

QAnon conspiracy theorists believe a deep state cabal of global elites is responsible for all the evil in the world. They also believe those same elites are seeking to bring down Trump, whom they see as the world’s only hope to defeat the deep state. QAnon has now brought the same conspiracy mentality to the coronavirus crisis.

As a researcher of online movements like QAnon, I use a combination of data science and digital ethnography to research how extremist movements use technology to create propaganda, recruit members to ideological causes, inspire acts of violence or impact democratic institutions.

A central component of QAnon is the crowdsourcing of narratives. This bottom-up approach provides a fluid and ever changing ideology. My analysis of Twitter shows from January to March, there was a 21 per cent increase (a total of 7,683,414 posts) in hashtags used by the QAnon community. This means the misinformation they spread has the capacity to reach a wider audience.

For instance, QAnon community influencers on Twitter promoted Miracle Mineral Supplement as a way of preventing COVID-19. The toxic product was sold by the Texas-based Genesis II Church of Health and Healing for US$45. The U.S. Food and Drug Administration had previously issued a warning about the dangerous and potentially life threatening side effects of the supplement.

In January, QAnon was amplifying narratives on 8kun (the internet forum formally known as 8chan), Facebook and Telegram (an encrypted instant messaging plaform) about a false theory that Asians were more susceptible to the coronavirus and that white people were immune to COVID-19. Not only are there racist undertones associated with this disinformation, it minimizes the threat posed by the virus.

From February until the second week of March, QAnon followed the lead of Trump in downplaying the threat of the virus and calling it a hoax. They believed the virus was a deep state plot to damage the president’s chance at re-election. The QAnon community said those warning about the pandemic threat were trying to detract from U.S. domestic politics, stop Trump rallies and remove all the economic gains they contended had occurred during the Trump presidency. 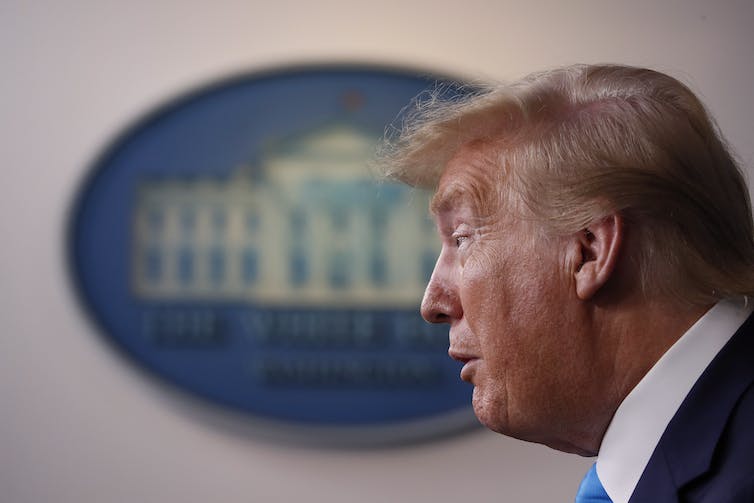 After Trump initially said COVID-19 posed no threat to the United States, the QAnon community reinforced that message by spreading disinformation about the disease.
(AP Photo/Alex Brandon)

After the WHO upgraded COVID-19 to pandemic status and the U.S. announced it was closing its borders to most people from Europe for 30 days, QAnon changed the narrative again. Suddenly, QAnon thought the pandemic was something to celebrate because it was a cover for the Trump administration’s secret plan to arrest deep state agents.

Evangelicals within the the QAnon movement viewed the pandemic as the promised coming of the Kingdom of God on Earth. David Hayes, who is better known as the Praying Medic and an influencer in the QAnon community with 300,000 YouTube subscribers, said in a March 14 livestream that there was no reason to be concerned about COVID-19. Hayes reassured his viewers that they may not be affected by the disease because this was “spiritual warfare” — only those who have not been chosen by God will be affected by the disease.

The person known as Q, who spawned the QAnon movement, didn’t post anything online about COVID-19 until March 23. Up until then, all of the medical disinformation, hoaxes and downplaying of the pandemic had been sourced from QAnon influencers and community.

In his first post on the topic of COVID-19, Q pushed a conspiracy theory with racial undertones about COVID-19 being a Chinese bioweapon and that the virus release was a joint venture between China and the Democrats to stop Trump’s re-election by destroying the economy.

The QAnon conspiracies have created an environment of complacency among its followers who aren’t taking the risks posed by the virus seriously. 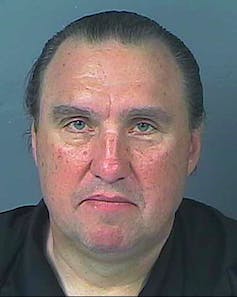 Rodney Howard-Browne, pastor of The River Church in Florida , was charged on March 30 with violating a safer-at-home order intended to limit the spread of the coronavirus. His megachurch held two Sunday services with hundreds of people after the order was issued.
(Hernando County Jail via AP)

Florida pastor Rodney Howard-Browne, who has given credence to QAnon in the past and has preached that the coronavirus was planned by the Bill and Melinda Gates Foundation, was arrested after holding Sunday services and disregarding federal, state and county orders to limit gatherings to less than 10 people. His conspiratorial beliefs led to his negligent actions, which put hundreds of people from his congregation at risk.

In another instance, right-wing media figures were spreading an “empty hospital” conspiracy, downplaying the pandemic and its death toll.

A QAnon account originally launched the #FilmYourHospital hashtag. This was amplified by QAnon influencers such as former California congressional candidate DeAnna Lorraine Tesoriero and QAnon influencer Liz Crokin. This hoax was then picked up by mainstream right-wing media figures promoting COVID trutherism to a wider audience.

The FBI once called conspiracy theories spread by QAnon and others a “potential domestic terrorism threat.” It’s time to call the infodemic a public health threat.