The ongoing novel coronavirus pandemic has roiled every layer of society and will continue to do so for the foreseeable future. Major League Baseball has been no exception. What follows is a timeline of how the outbreak has affected MLB, which not so long ago was providing us with the comfortable routines and assumptions of spring training. Now, the only thing certain about the 2020 season is the uncertainty surrounding it.

This is how we got to that uncertain and uneasy place in baseball.

Dec. 31, 2019: The China offices of the World Health Organization (WHO) are informed of a cluster of pneumonia cases in Wuhan City of unknown origin.

Jan. 7, 2020: Chinese authorities isolate and identify a new type of coronavirus, which will come to be known as COVID-19.

Coronaviruses are a large group of viruses that can cause illnesses as minor as the common cold, or as serious as Middle East Respiratory Syndrome (MERS) and Severe Acute Respiratory Syndrome (SARS), according to WHO. The COVID-19 virus can cause symptoms including fever, cough, and shortness of breath, according to the U.S. Centers for Disease Control and Prevention. While some patients show mild symptoms and recover, others develop life-threatening complications, such as pneumonia.

Feb. 10, 2020: Pitchers and catchers begin reporting to spring training in Arizona and Florida.

March 9, 2020: Following a conference call with all 30 teams, MLB announces its intent to continue playing spring training games and to open the regular season on March 26 as planned. The statement notes that MLB has been in regular contact with health officials. MLB does, however, limit clubhouse access to players and essential personnel. Most notably, this means media are no longer allowed in spring training clubhouses.

March 10, 2020: The Mariners are looking into the possibility of playing regular season games at their spring training facilities in Arizona, Evan Drellich of The Athletic reports.

March 11, 2020: Washington governor Jay Inslee, whose state has been hit the earliest and the hardest by COVID-19, announces a ban on large group gatherings through at least the end of March. Soon after, the Mariners announce that they “are working with the Major League Baseball office of the commissioner on alternative plans for our games that were scheduled for the end of March at T-Mobile Park in Seattle.”

The City and County of San Francisco also announce a two-week ban on gatherings of more than 1,000 people. The Giants soon after announce that their scheduled March 24 exhibition against the Athletics in Oracle Park in San Francisco has been cancelled.

The City of Oakland and Alameda County likewise announce a prohibition on public gatherings of 1,000 people or more people through the end of March. The A’s announce they are working with MLB to reschedule the affected games.

MLB is exploring the option of having teams from the most affected locations play games at alternative sites as opposed to playing in empty home ballparks, Jared Diamond of the Wall Street Journal reports.

The NBA suspends its season indefinitely after Utah Jazz center Rudy Gobert tests positive for the virus. The preliminary positive test result is learned moments before the Jazz tip-off against the Oklahoma City Thunder. The news and the NBA’s swift response to it will lead to the shuttering of other major sports leagues and events.

WHO declares the COVID-19 outbreak to be a global pandemic.

March 12, 2020: MLB announces that spring training games are cancelled as of 4 p.m. ET and that the start of the regular season has been pushed back two weeks. Opening Day had originally been scheduled for March 26. MLB’s decision comes after the NBA, NHL, and MLS all suspended their seasons, which were already in progress. 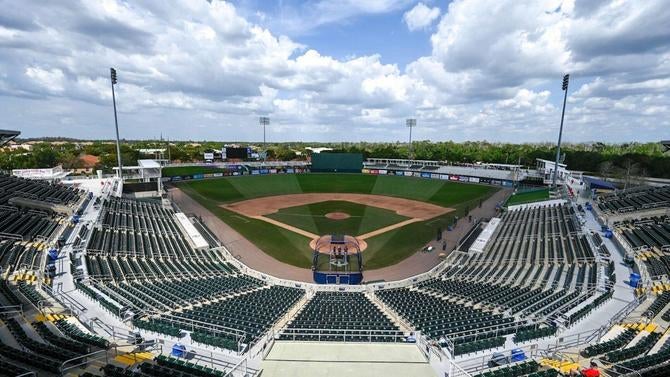 The NCAA cancels the all spring and winter championships. Most notably, that means neither the men’s nor women’s NCAA Basketball Tournament will be held in 2020. It also means that the College World Series in Omaha, Nebraska, has been cancelled even though the event isn’t until early June — almost three months away. For the first time, the MLB Draft had been scheduled to be held in Omaha during the College World Series.

March 13, 2020: MLB announces that spring training camps have been suspended. Major league players have the option to return home, remain near camp in Arizona or Florida, or return to their team’s home city. The Yankees vote unanimously to remain in camp.

The Mets announce that director of player relations and community outreach Donovan Mitchell Sr. has tested negative for the coronavirus. Mitchell is the father of NBA star Donovan Mitchell of the Utah Jazz, who had previously tested positive.

March 15, 2020: The Yankees confirm that a minor leaguer in their system has tested positive for coronavirus. The unnamed player becomes the first MLB-affiliated player to be a confirmed COVID-19 case. The team quarantines all minor leaguers for two weeks. 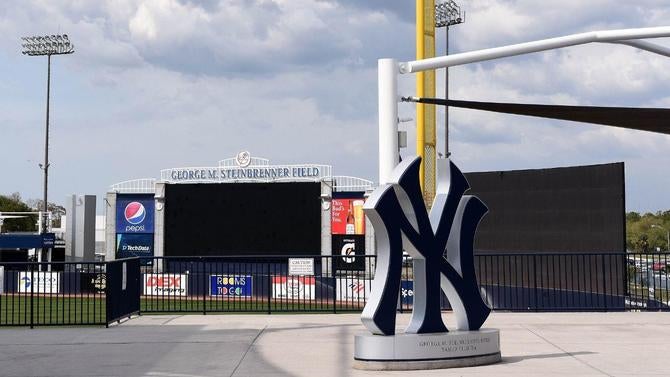 In an internal memo, MLB advises non-roster players — i.e., those not on a team’s 40-man roster — to return home. MLB also advises teams against holding group workouts. As for players on the 40-man roster, the memo states that “pursuant to our understanding with the Players Association, 40-man roster players must be permitted to remain at the club’s spring training site, and are eligible to receive their usual spring training allowances. (Those players currently on optional assignment should receive allowances in accordance with the past practice of the club.) We understand that many 40-man roster players have chosen to remain in camp to date, but we anticipate that may change in the coming days as events continue to unfold and players become better educated about current conditions.”

March 16, 2020: MLB announces that the start of the 2020 regular season will be pushed back until at least the middle of May. Commissioner Rob Manfred says team owners still hope to play a full regular season schedule, per Derrick Goold of the St. Louis Post-Dispatch. Also on this day, Tom Haudricourt of the Milwaukee Journal-Sentinel tweets that he’s hearing that an early July start date for the regular season is a best-case scenario. Yankees manager Aaron Boone during an appearance on MLB Network Radio says games will be added to the end of the existing regular season calendar.

MLB and MLBPA announce a joint $1 million donation to be split evenly between the Feeding America and Meals on Wheels America organizations.

March 17, 2020: The Yankees confirm that a second minor leaguer in their system has tested positive for the virus. The team states the player has been quarantined and is seeing his symptoms lessen in severity.

Each of MLB’s 30 teams commits $1 million to aid ballpark workers during the delay.

March 18, 2020: The Reds announce that an employee based in Arizona has tested positive for COVID-19 and that all team employees who came in contact with that person are self-quarantining and being tested. 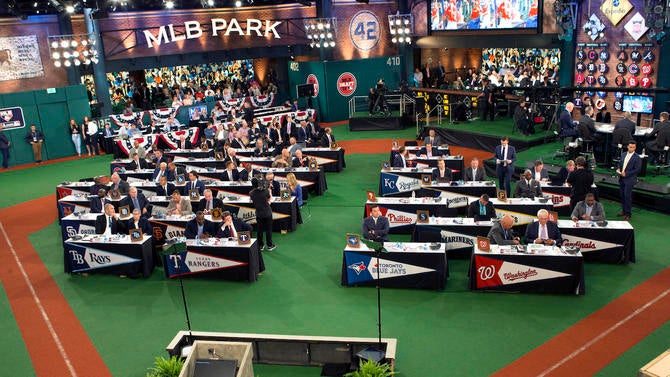 As well, MLB is considering skipping the 2020 draft and international signing period as cost-saving measures, according to the Associated Press. The AP also notes that players and owners are discussing the issue of service time for 2020. Normally, 172 days on an MLB roster are required for a player to earn a full year of service time, which affects things like arbitration eligibility and free agency. If the 2020 season is heavily abbreviated, which seems highly likely, then MLB and the union must hammer out what will constitute the service time cutoff. This has the makings of contentious negotiations.

March 19: MLB cancels the Mexico City and San Juan, Puerto Rico series scheduled for April. MLB also announces that players under uniform minor-league contracts will be paid their standard spring meal allowances in a lump sum. The payments will cover scheduled allowances through the original April 8 start date of the minor-league season. Prior to this initiative, a number of individual clubs announced plans to pay minor-league players their per diems.

With regard to the service-time issue, the MLBPA wants players credited with a full year in 2020 if they earned at least 60 days of service in 2019 no matter how many games are played this year, Joel Sherman of the New York Post and Ken Rosenthal of The Athletic report. MLB in turn is willing to give players credit for a full season if they reach 130 games in 2020 rather than the usual 172 days but would want to prorate if the 2020 season spans fewer than 130 games.

March 24: The Red Sox announce that an unnamed prospect within their system has tested positive for COVID-19. The team’s spring training facilities are shut down and cleaned, and all personnel to come into contact with the player are self-quarantined. The team says it’s likely the player contracted the virus after he left Red Sox camp.

March 25: Commissioner Rob Manfred makes his first public comments since the league shutdown in an interview with ESPN. On what was supposed to be the eve of the 2020 campaign, Manfred says that “nothing is off the table” in regards to the season and he is hopeful teams could return to spring training in May.

March 27: MLB is still hoping to play a 140-game season with playoffs expanded to 14 teams, Jon Heyman reports. As well, the league hopes to start the season in late May. Although MLB hopes to avoid playing games in empty ballparks and at alternative locations, it’s open to doing that if necessary.

MLB and the MLBPA also finalize a deal that establishes a potential framework for the 2020 season. Players will receive service pro-rated service time for 2020, and if no season is played then they’ll be credited with the amount of service time they logged in 2019. As for a potential 2020 season, players and owners are willing to stretch the postseason well into November in order to maximize the number of games.

While both sides hope to play games only when mass gatherings are allowed and after medical professionals say it’s safe to conduct games, players and owners reportedly are also willing to play games without fans in attendance and at alternative sites such as spring training facilities. As well, in order to accommodate a more compressed game schedule, rosters may be expanded, and the All-Star Game could be cancelled.

March 31: MLB announces extended financial support for minor league players. Those players will continue receiving weekly payments of $400 each through the end of May or until the start of the minor league season, whichever comes first.

Joel Sherman of the New York Post reports that starting the 2020 season without fans in attendance is becoming an increasing possibility.

The AP reports on the specifics of MLB’s payments to players during the shutdown.

April 1: MLB announced the 2020 London Series between the NL Central rival Cardinals and Cubs, originally scheduled for June 13-14, has been canceled due to the pandemic.

The fiance of Webster Garrison, a former major-league player and current minor-league manager with the Athletics, tells the AP that Garrison is hospitalized and on a ventilator because of COVID-19. She also says Garrison is “turning the corner.”

April 7: MLB and the MLBPA reportedly discuss a plan to play all games — or at least all games to start the season until stay-at-home orders are lifted — in the Phoenix area, primarily at spring training sites and at Chase Field, home of the Diamondbacks. One possible timeline has regular season games starting as early as May. The plan, though, has many logistical hurdles, and MLB eventually says it’s just one of many options being discussed.

April 10: MLB reportedly considers using spring training facilities in Arizona and Florida for regular season games. Doing so would require teams to be placed in leagues according to spring training locations rather than the traditional American and National League alignments.

April 13: ESPN’s Jeff Passan reports that the “Arizona plan,” in which all teams would begin the regular season by playing their games in the Phoenix area, is the most likely path toward beginning the 2020 season.